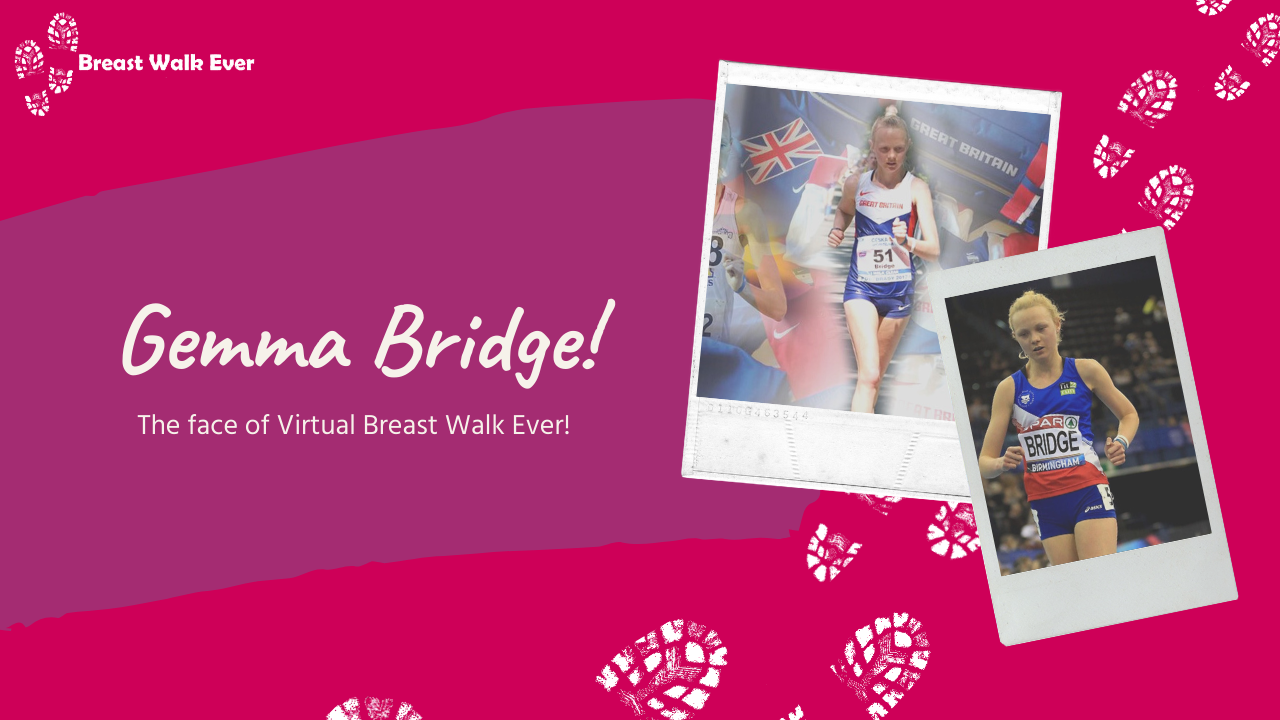 The Breast Walk Ever is delighted in introducing Gemma Bridge. Gemma is a member of Team England achieving some incredible results such as 5th in 2018 Gold Coast Commonwealth Games and Gold in the 3000m race walk at the 2017 British Athletics Indoor Team Trials.

Gemma has kindly offered her time to give our Virtual Breast Walk Ever supporters some tips on all aspects of walking and endurance. Gemma will be releasing videos of the starting points of each area as well as in-depth blogs to help you make it to the finish line of this virtual walking challenge.

My name is Gemma. I am a bit of a jack of all trades as I am a PhD student, international athlete and freelance food and science writer. I am currently in Leeds for my PhD, but I grew up in Oxfordshire and my family still live in the county. I have always been very active. As a child I used to love trampolining, swimming and gymnastics. But, when I entered secondary school, I developed a passion for running. I competed in many local races for my school and later for my club, Oxford City. I continued to run whilst at the University of Birmingham and found a talent for endurance events. I was offered a full athletic scholarship to McNeese State University in America, where I continued to improve my running. Whilst there I also completed a dual master’s in health Promotion and Exercise Physiology.

When I returned to the UK, after two years in the USA, I moved to Leeds to do a PhD in public health. Leeds was and still is, the national hub for racewalking. Despite still loving to run, I was keen for a new challenge. So, I decided to switch gears and become a walker. Within a few months I had unexpectedly become one of the top up-and-coming race walkers in England. In my first season, I became British champion over 3km and English champion over 10km. A few weeks later I shocked myself when I achieved the fastest 20-kilometer debut time in British history (1:37:35). Then, even more shockingly, in June of the same year, I shaved more than five minutes off my time and qualified for the IAAF World Championships in London. I had some injury issues in 2018 and 2019, but I was fortunate enough to be selected to compete at the Commonwealth Games, which were held on the Gold Coast, Queensland, Australia.

Despite the current pandemic, I recently completed my PhD, and am still training hard. I am working to return to the form of 2017 so that I can achieve selection for the Tokyo Olympics, which were recently rescheduled to 2021 as a result of COVID-19.

Like most people, I have many friends, family and colleagues who have battled with cancer. I have seen how horrible the condition can be. The only way that we are going to stop cancer, is through dedicated research. But as a PhD student, I fully appreciate how hard it can be to conduct research if you lack financial resources. As a result, the work of charities like ABC, and the support that they receive from the community, is invaluable.

What am I going to do to help?

I am excited to have been asked to assist ABC with one of their biggest sporting events of the year, the Breast Walk Ever. Over the next few months I am going to be sharing training tips, nutrition advice and motivational quotes, to inspire and encourage as many of you as possible to get your walking shoes on.

We may have moved Breast Walk Ever to a virtual event, but that doesn’t mean that you shouldn’t keep focused on the event. I am facing months without races, and that means that it is sometimes hard to motivate myself to pull on my trainers and get out of the door. But I have come up with some ways to keep me going, even when I might not want to. In this post I share four ways that you can use to maintain your motivation to achieve your goals, and complete the Breast Walk Ever 2020.

Set mini targets to achieve each day and bigger goals to achieve each week and month. Write your goals out and tick them off as you achieve them. Can you walk an extra 10 minutes this week? At the end of each week review what you have achieved, this will help you keep to an objective and give focus. Then, after 12 weeks you will be able to look back and see how far you’ve come.

Technology allows us to stay connected, even when miles apart. Make the most of it and ensure that you have regular catch up with friends and family. Also, why not use the technology to keep you motivated to train? What about doing a treadmill walk, or an indoor gym session whilst on a zoom call with a friend? Also, don’t forget the wider Breast Walk Ever community on social media. Why don’t you engage with others, set certain goals within a time period and share achievements to keep each other motivated.

Doing something different can be as good as rest for keeping your goals on track. There are lots of new things you can try. Why not check out some online yoga to boost your strength and flexibility, go to the park and get involved with a boot camp, or get on your bike and go for a ride with friends or family. Trying out different modes of exercise will not only keep you motivated moving forward, but it will also add value to your fitness by challenging your body in new ways.

Training on your own for a big event can feel overwhelming at times. It is important that you focus on your health as well as your fitness. Make sure that you get a good night’s sleep as often as possible – aiming for at least 7 hours, focus on staying hydrated – drinking lots of fluid before, during and after training, and be sure to fuel adequately throughout the day to keep your energy levels up.

Now, go and get your walking boots on, and get out. You are at the start of an exciting journey, one that your future self will thank you for.

See all of Gemma's videos in this playlist!

12-week’s to walk a marathon: A training plan

Save the training plan to your Device! 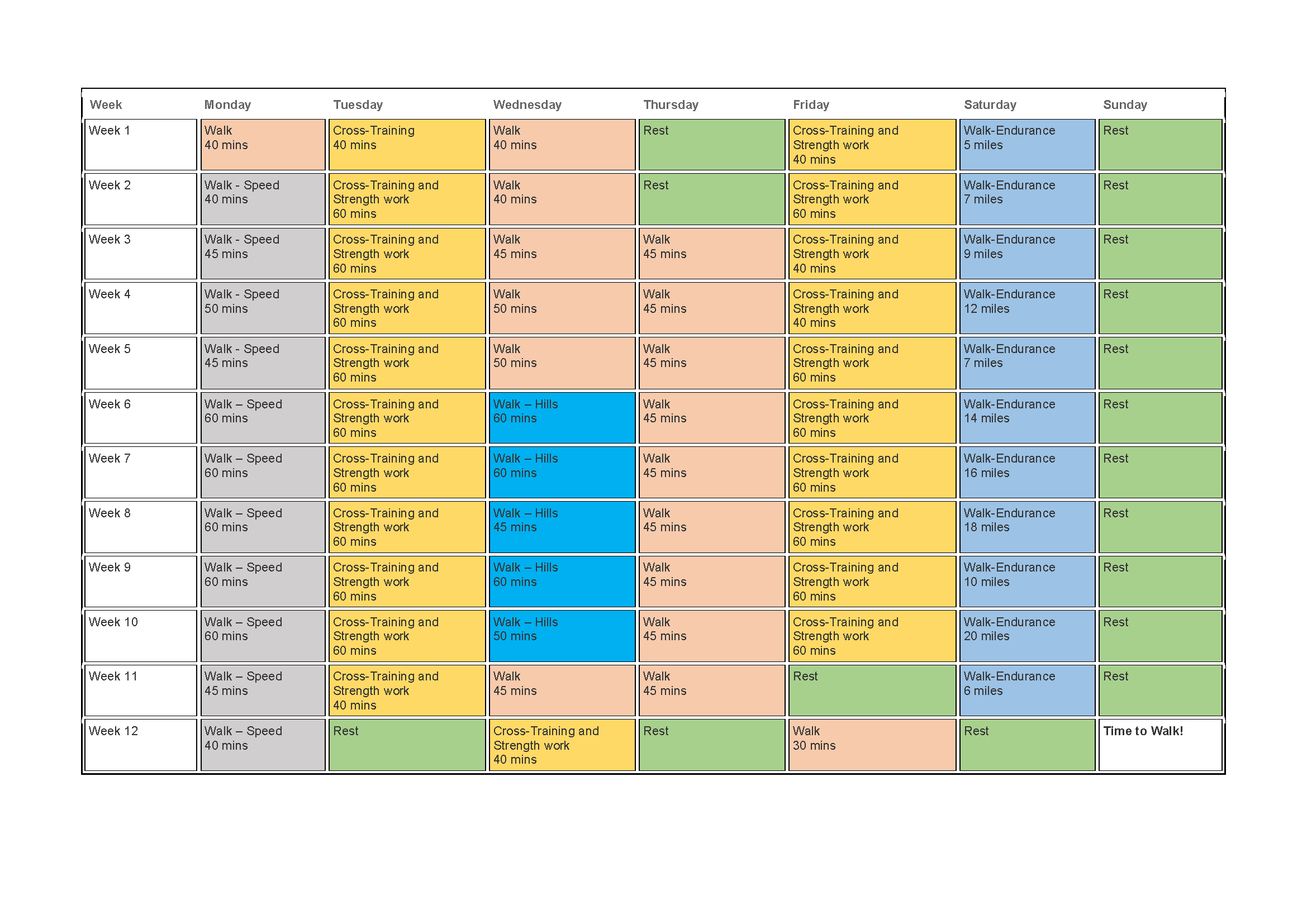 This is the first-week of your training plan. This week is great for tracking your average walking speed to help you benchmark goals.
Week 2 already! This week is your introduction to speed walking. This is where monitoring your average walking speed is really useful! Aim to walk twice as far as you did last Monday.
Congrats! You are halfway through the training. You will soon start to feel the benefits for the training. Distances and times should start to improve! Hill training is helps build up power in the legs. Aim to keep a steady pace on the hills.
Time to put this training to the test with the Virtual Breast Walk Ever! Sign up today!
Yay! Rest Day!

Against Breast Cancer is a registered charity in England and Wales. Registered Charity No. 1121258